Immediate Need
We are here to help you. If you have need of our services, please call us, day or night, at:
(732) 545-0700
To better prepare yourself, we have provided you with some helpful information regarding the immediate need process.
Contact Us / Location

We're sorry but the candle you have selected is currenty in the process of being purchased or has just recently been purchased.

Please feel free to select another candle or check back in 15 minutes to see if the candle you have selected has been released for purchase.

We're sorry but there are no candles available for lighting.

You have already begun a candle purchase session. If you would like to continue with your current candle choice please click "Continue" otherwise please click "Select Another".

In the event that there is an error
in the information presented,
please contact the funeral
home by clicking here. 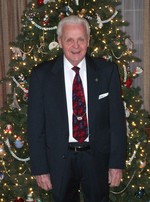 John Joseph McNally of Franklin (Somerset) NJ, passed peacefully at home on Sunday evening January 5, 2020, with family by his side. John was predeceased by his loving wife of 53 years, Veronica Theresa, in 2008. He was also predeceased by his sister, Jane, and her husband, Joseph Malkowski.
John is survived by his four children and their spouses: Deborah (John) Deley, Thomas (Rene) McNally, Robert (Cindy) McNally, Kathleen (Richard) Ostrowski. He is also survived by 5 grandchildren: Kristen McNally, Melissa (Brent) Enyart, Ryan (Amy) McNally, Connor and Nicole Deley; and two great-grandchildren; Aiden and Veronica Enyart. John is also survived by two nieces: Carol (Ray) Borgensen and Maureen Burzitis. John was born and raised in Bayonne, NJ, where he lived with his parents and sister and attended Snyder High School in Jersey City. On March 1, 1948, John joined the United States Army. After basic combat training, Private McNally was assigned to the 8th Field Army, Occupation Forces Japan. He loved to tell stories about all the different sports he participated in on base before he was mobilized into the war zone, serving as a combat light infantryman. On September 2, 1950, he was wounded during the United Nations Defensive, and again on December 2, 1950, during the Chinese Communist Forces Intervention campaign. John was awarded the Purple Heart Medal for being wounded at the hands of the enemy. Upon discharge he had earned the United Nations Service Medal, the Army Occupation Medal (Japan), the Korean Service Medal with a silver star (denoting combat in five major campaigns), and the National Defense Medal. When John returned, he met and married Veronica Theresa, his loving wife, at St Henry’s Church in Bayonne, NJ. They eventually settled in Westfield, NJ, where they raised their four children. In 1976 they ventured into their second business, a Dairy Queen, that they owned and operated until 1986. John and “Ronnie” were well-known in town for their soft-serve ice cream and impeccable store. After several moves John and Veronica settled in Somerset County in 1998. John loved to stay active and be around friends, so he continued working in the mail-room of Brothers international in Bridgewater, NJ, until the age of 85. He retired in 2014 after 25 years of “fun,” as he would say. Friends and family will remember him for his stunning blue eyes, infectious laugh, endless energy, Arthur Murray dance moves, and his love and devotion to his family and friends.

This Book of Memories brings those affected by loss together by encouraging communication and self-expression. By giving friends and family a special place to tell their stories and express their feelings of loss, it helps them care for one another during a very difficult time. Click on any of the links to the right to access features or information within this memorial website.